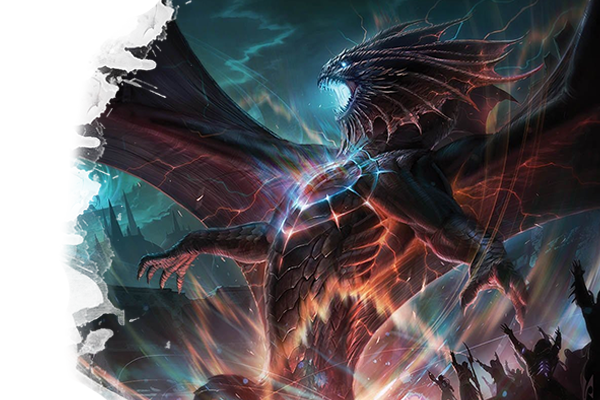 While the great chromatic and metallic dragons wage battles and intrigue, sometimes in the name of Bahamut or Tiamat, the gem dragons are content with more philosophical ways, enjoying contemplation and meditation. While Tiamat lords over chromatic dragons with an iron claw, and Bahamut inspires goodness in his followers, most gem dragons don’t pay all that much mind to Sardior: the ruby dragon.

Sardior is the creator of gem dragons, although where he came from is unknown. Some say a ruby coalesced in the elemental chaos or the far realms, growing until it became touched by divinity where it grew into an egg and eventually Sardior hatched fully formed.

Sardior is playful, enjoying intellectual exercises with other creatures. He also possesses a sharp wit, and is an infamous conversationalist. At the height of Netheril, Sardior considered the wizards to be sometimes allies and sometimes foes, although always a group to count on when going against the Phaerimm. Today, he is more concerned with proliferating psionic power within all the races of the world.

Ideal. “Leave the world a better place than it was when you entered it.”

Bond. “The world is full of arcane and divine… it needs more powers of the mind to balance them out.”

Flaw. “My ascension to divinity makes it easy to understand the big picture, but hard to see the impact on individuals.”

DMs wanting to know more about Sardior should check out the following books: “That’s not in the Monster Manual” from Dragon #37, Planes of Law, and “The Legend of Sardior, The Mind’s Eye” from the Wizards of the Coast website (found here)

While not Bryan’s intention, while reading this over I couldn’t help but think of Niv Mizzet, from the Magic: the Gathering world of Ravnica. Sardior’s statblock, as presented below, could be used for Niv Mizzet if you are using the setting guide Guildmaster’s Guide to Ravnica! Bonus!

The Ruby Palace is a flying castle which travels the material plane high above the world. Clouds generate around the castle as threads of the astral plane boil away around the fortress. If the palace remains in place for at least one week, the regional effects of the castle begin to spread out at a rate of 1 mile per day, to a maximum of 8 miles.

Lair Actions. On initiative count 20 (losing initiative ties), Sardior can take a lair action to cause one of the following effects; he can’t use the same effect two rounds in a row:

Regional Effects. The region containing Sardior’s lair is warped by his magic, creating one or more of the following effects:

Sardior as a Mythic Encounter

Sardior is a powerful encounter on his own, but if the adventurers want a true challenge fit for the gods, you can use his Ruby Soul trait. Using this trait marks a drastic turn in the encounter as his divine spark flares into overdrive. Once Sardior has used this trait, he can choose one of his mythic actions when he uses a legendary action.

Read or paraphrase the following text when Sardior uses his Ruby Soul trait:

Sardior stands before you, eyes filling with ruby light. It’s then that you notice it: a light burning deep within the gem dragon. This light grows brighter, and brighter, until it’s almost painful to look at.

“Silly mortals. I’m no mere child of divine blood. I am not a simple chromatic creature, or a scion of metal. I am pure thought! My mind is an infinite plane of contemplation, and now, I contemplate your DOOM!”

Fighting Sardior as a mythic encounter is equivalent to fighting two CR 30 creatures in one encounter. Award a party 310,000 XP for defeating Sardior after he uses Ruby Soul. You can also reward them with Ruby of Free Thought, Resurrection Egg, and the spell Ruby Armor of Sardior in addition to any other treasure he might hold.

Discorporation. When Sardior dies, his body is destroyed but his essence travels back to his Ruby Castle, and he is unable to take physical form for a time.

Legendary Resistance (5/Day). If Sardior fails a saving throw, he can choose to succeed instead.

Limited Magic Immunity. Unless he wishes to be affected, Sardior is immune to spells of 6th level or lower. He has advantage on saving throws against all other spells and magical effects.

Ruby Soul (Mythic; Recharges after a Short or Long Rest). When Sardior is reduced to 0 hit points, he does not die. Instead, Sardior is filled with divine wrath. Sardior regains 305 hit points and gains 305 temporary hit points.

Additionally, Sardior casts bright light in a 250-foot radius, and dim light 250 feet beyond that. Spells which magically create darkness are automatically counterspelled within this area. Creatures who fail their saving throws caused by Sardior’s breath weapons while in the area of bright light are also blinded until the start of their next turn.

Regeneration. Sardior regains 30 hit points at the start of his turn.

Sensitive Mind. Sardior is constantly benefitting from the effects of detect evil and good, detect magic, find the path, and find traps.

Multiattack. Sardior can use his Frightful Presence. He then makes four attacks: one with his bite, one with his tail and two with his claws.

Concussive Breath. Sardior exhales concussive force in a 120-foot line that is 10 feet wide. Each creature in that line must make a DC 27 Dexterity saving throw, taking 70 (20d6) force damage on a failed save or half as much damage on a successful one. Creatures reduced to 0 hit points by this breath weapon are not dying and instead are stabilized automatically.

Blazing Radiance. Sardior exhales a blast of radiant fire in a 90-foot cone. Each creature in the area must make a DC 27 Dexterity saving throw, taking 31 (7d8) fire damage and 31 (7d8) radiant damage.

Hardened Scales (Costs 2 actions). Sardior hardens his scales, reinforcing them with mental fortitude. The next time Sardior takes damage before the start of his next turn, he has resistance to all damage that turn and this effect ends.

Wing Attack. Sardior beats his wings. Each creature within 15 feet of Sardior must succeed on a DC 27 Dexterity saving throw or take 24 (4d6 + 10) bludgeoning damage and be knocked prone. Sardior can then fly up to half his flying speed.

If Sardior is a Mythic encounter, he can choose from the options below as additional legendary actions for 1 hour after using the Ruby Soul mythic trait:

Dive Bomb. (Costs 2 actions). Sardior moves up to half his flying speed away from the ground. This movement does not provoke opportunity attacks. At the start of his next turn, Sardior immediately plummets directly towards the ground, creating a large shockwave in a sphere with a radius of 5 feet for every 5 feet of movement Sardior plummeted. Each creature within this sphere must succeed on a DC 27 Dexterity saving throw or be knocked prone and pushed 15 feet directly away from Sardior. Creatures who succeed on this saving throw instead are only pushed 5 feet directly away from Sardior and not knocked prone unless that movement causes them to collide with a creature or structure.

Telekinetic Throw. Sardior’s eyes glow bright blue. Before the end of his next turn, when Sardior uses the multiattack action, as a bonus action he can cast telekinesis.

Reflective Scales. Sardior’s scales shift and twist like prisms. As a reaction before the start of his next turn, whenever a spell is cast on Sardior and he succeeds on his saving throw, Sardior can choose one creature that he can see who is a valid target for the spell and it is cast upon them instead.

Below are spells and magical items you can reward your party for defeating Sardior, the Ruby Dragon.

One of the many ruby scales that comprise Sardior’s tough exterior that gleams brighter and more radiant than the others. This scale—which could easily be mistaken for a gemstone—can impart powerful psionic power to a spellcaster who chooses to attune to it.

Psionics. When you attune to the ruby, your mind begins to race at a pace previously unknown to you. You gain the ability to cast some of your spells without expending spell slots or using components.

At Will: Any 1st-level spell you know.

Empty Mind. While attuned to the scale, you are always under the effects of the spell mind blank. If a spell or effect would attempt to sense your emotions or read your thoughts, you can choose to share any information you’d like, or nothing at all.

Sentience. The Ruby of Free Thought is a sentient object of neutral alignment, with an Intelligence of 30, Wisdom of 26, and Charisma of 29. It has hearing and blindsight out to a range of 300 feet, and it can communicate telepathically with any creature within that range.

Personality. The ruby, while sentient, does not contain Sardior’s true mind but instead a sort of pseudo-intelligence designed to share specific information with whomever it attunes to. It instructs its bearer on psionic teachings and practices, and will take any opportunity to lead the bearer back to the Ruby Palace, or to a nearby gem dragon who can assist in reaching the palace. It harbors no ill will towards its bearer and will share whatever information it can to help protect them, but its ultimate goal is to be reunited with Sardior.

Destroying the Ruby. The ruby is a powerful artifact, immune to the effects of all traditional forms of damage. To destroy the ruby, it must be brought to a hidden location within the Ruby Palace: the chamber where Sardior keeps the fragments of the egg from which he hatched.

This egg resembles a very large ruby egg roughly the size of a halfling. This egg is always warm, regardless of the actual temperature surrounding it. When a creature puts their ear to the egg, they hear a deep heartbeat within.

When the creature attuned to this egg dies, they can choose one of the two following effects to occur 7 days later:

Resurrection. The attuned creature is resurrected as per the spell resurrection with no drawbacks.

When a creature is brought back to life using either spell, the creature loses attunement and the egg hatches and a new adult gem dragon is born (d6: 1 - Amethyst, 2 - Emerald, 3 - Sapphire, 4 - Topaz, 5 - Crystal, reroll any 6) and a new egg grows in the hoard of a gem dragon. That gem dragon will become Sardior in the event of his death.

Crushing the ruby used in casting the spell into a dust, and then coating your skin with it, a protective spell is raised. This shield has a total hit point value equal to the GP value of the gem used in casting the spell. Whenever you take damage or when you fail your saving throw against a spell or magical effect from a creature, you can use your reaction to negate it.