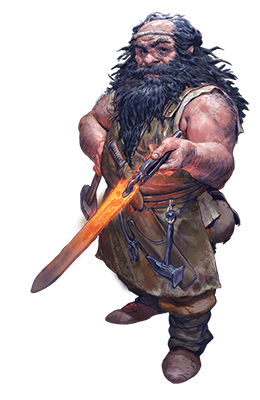 The Armorer’s Handbook by @dmheavyarms was a breakout success for the author—a clear demonstration of his expertise as a designer and producer of a polished product. It was an immediate hit and currently sits as one of the all time best-selling products at Dungeon Masters Guild.

This short but dense 28-page supplement provides an easily referenced and quick system to improve and alter your basic weapons and armor. Such upgrades include modifying the armor by proofing, which grants its wearer a small damage threshold for nonmagical slashing damage, or burnishing it to a mirror finish to impress yourself upon others by way of advantage on Charisma-based checks. You can also craft special ammunition such as the berserk dart or bodkin arrows designed to penetrate plate and mail armor. These upgrades also include a variety of different materials such as cold iron, shadowsilk, and dragonhide; as well as optional rules for wear and repair on equipment.

In addition to this, which is enough material to warrant the purchase on its own, the PDF’s next chapter covers a comprehensive system of Rune Magic with regard to how it applies to crafting and armor. Runestones are similar to magic items: found in treasure hoards or behind closely guarded counters in a high-end emporium and requiring identification through the use of the identify spell or spending time with the runestone over a rest. However, unlike magic items, they serve no function on their own. Instead, to benefit from a rune, it must be affixed to equipment that bears the runic tag (an upgrade option from the previous chapter). Runestones can provide benefits such as allowing your weapon to reanimate Small or Medium humanoids as zombies upon death, or provoking rolls on the Wild Magic Surge table when you score a critical hit.

The Rune Magic chapter also includes rules for crafting runestones, a detailed Runesmith’s Guild which provides downtime activity goals for your players as well as potential story hooks for your campaign, and infusions for the Artificer class and a Runesmithing Adept feat to round it out.

Lastly, the PDF is rounded out with an appendix where the lead designer explains their thought processes and answers frequently asked questions, justifies balance, and provides quick reference tables for the various upgrades and runes throughout the book.

Crafting systems in games are a fantastic exploration feature where players get the opportunity to interact with their equipment, mix and match options, and customize it to fit their character’s themes or simply squeeze every last drop of efficiency out of the system. This is prevalent in popular video games such as The Witcher or The Elder Scrolls: Skyrim, and is notably missing from the popular table top game Dungeons & Dragons 5th Edition. Throughout the 3rd party and homebrew communities every designer it seems has their take on this system. However, I feel it is safe to say that The Armorer’s Handbook is among the most popular and well liked and it’s evident why.

When 3rd party content is brought to the table, one of the first questions is “Is it balanced?” (What does this mean exactly? Different things to different people! A future blog post might just cover this!)

What The Armorer’s Handbook does is address this question head on, right there in the PDF. There is no need to check reviews, comments on the product page, or ask in your various communities. @dmheavyarms is a show and tell designer, leaving nothing to ambiguity.

The content is rich, immediately useful, and deployable at any table. This is something you can easily introduce to an ongoing campaign, or let your players add to their character’s starting equipment during session zero to give them additional investment in their armaments and texture to their character.

Personally as a Dungeon Master, I am particularly stingy on magic item rewards yet I look at the runestones with excitement to use in my games. Rather than giving my players a dusty old Lightning Caller thats backstory isn’t related to the party, they can improve their heirloom shortsword with the tempest rune and weave the narrative right into the tapestry of their personal story.

I’m also very interested in simply adding the equipment customization properties to equipment the party finds in their travels.

All in all, for a price tag of $9.95, there really is no reason to be on the fence about this product unless you have absolutely no use for crafting in your games.

You can find dmheavyarms here:

and on his website: heavyarms.com where you can purchase the Gunslinger class for Dungeons & Dragons 5th Edition!